With Hanukkah approaching, there is a divine reality constantly present in our pondering within the Jewish world–– miracles. This world has limitations, or at least perceived limitations.  When we look at the world around us, things often seem so overwhelmingly impossible.  We loose sight of the divine reality that our God is so much bigger. Hanukkah reminds us of the miraculous that is truly possible with the God of Abraham, Isaac and Jacob. For me the reality of miracles is one that is prominent in my life… Every day for the last nine years I have had a fantastic reminder of how great our God truly is. 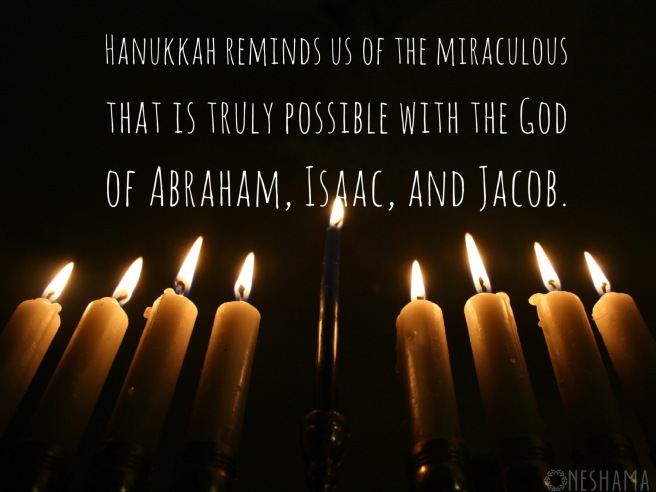 When we talk about miracles, there is one that is always at the forefront of my mind.  For as long as I can remember I have wanted to be a mom.  Though I wanted this so bad, I also knew that it was a long shot because I have a medical condition that makes it all but impossible.  Years ago, while living in New York, my husband and I decided we were ready to try and have a child.  We were told because of my condition it would be hard to conceive with medications and impossible without them.

When we were told how “impossible” things were, I chose to meditate on the verse in Romans chapter 8, “Now we know that all things work together for good for those who love God, who are called according to His purpose.”  When I think back to those months of maybe’s and not yet’s, I am also reminded that through that time my husband and I were becoming the couple, the partnership and the soul mates we are today.  I am reminded that had we not went through that time of highs and lows, we would not be the people and the parents we are today.

After several months of seeing a specialist and trying their way, we stopped going to the specialist. This sudden stoppage was most certainly not by choice, but rather because our insurance told us they’d cover the expenses and then suddenly ripped that away from us.  Honestly, during this time, especially with the unforeseen insurance conundrum changing our direction, I felt that my chance to have children had past.

In spite of our fears and angst which seemed to continually multiply, knowing that the 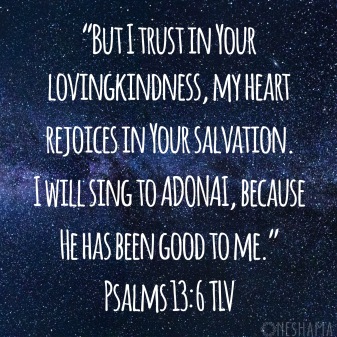 Lord was bigger than the words of the medical community, my husband and I had a meeting with our Rabbi and shared with him our dilemma. He suggested that we both go through deliverance, which we did, and what started out as a seemingly impossible thing ended with a beautiful baby girl thanks in no small part to our Rabbi for listening to the word of the Lord.

Where the medical world told me “This is not going to happen,” I chose to lean upon God’s word, which reminds us in the Psalms “But I trust in Your loving-kindness, my heart rejoices in Your salvation. I will sing to Adonai, because He has been good to me.”  Although the road was rough and painful, and some days it was hard to remember the Lord was the one that had put the call of motherhood on my heart for a reason, in the end He was indeed good to me.

My walk though fertility struggles is a constant reminder of the story of the Maccabees who believed that the God of our forefathers was bigger than the sum of their “impossibilities.” While on paper this rag-tag group of unprepared Jews were most certainly not meant to be an odds-favorite in Las Vegas, they were well aware that, no matter what stood against them, they had the favor of the Lord on their side.

The Maccabees believed and trusted that their little, nobody group of renegades could win against the Greeks.  All the odds were against them, but they believed HaShem would come through for them just as He came through for me, not once but twice.  Only the second time, we never needed to, nor even thought to, seek doctors or their medication, the Lord saw fit instead to bless our family again without any of the before mentioned problems and in all honesty, He surprised us with a miracle we didn’t even know we needed – a baby boy.

Throughout our battle with infertility, God reminded me of his unfailing love for me and reminded me that He placed the burden of having children on my heart.  As Romans 8:37 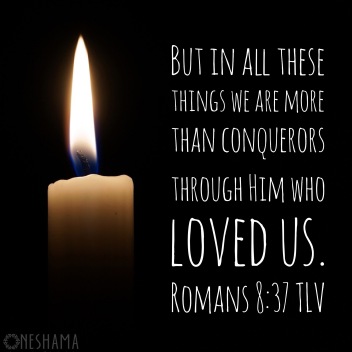 says, “But in all these things we are more than conquerors through Him who loved us.”  Our battle should have been an obvious loss in the world’s eyes, just like the Maccabees battle against the Greeks, but God had a different reality in store, one that goes against what is deemed possible by the world’s short-sightedness.

We can all feel like the world is crashing down upon us at some point in our lives.  Truth is, the enemy wants that to be the case.  The more he can toy with us, the more he can yank the proverbial rug out from under us, the more he can burn a hole in our desires by dangling our hopes in front of us, the more he feels like he is winning and in control. However, we serve a God of miracles.  We serve a God who loves us and cherishes us.  We serve a God who wants nothing but blessings for us. It is in these times when it feels like the world is crashing around us, like everything is going wrong and we are being entirely overwhelmed by the world we find ourselves in, that it is the most important for us to recognize the Maccabees in us.  In the same way that the Lord provided a mighty and miraculous victory against all earthly odds, he’s got nothing but favor in store for those who love Him. It is in those times of distress and despair that we are called to not lose faith but instead to call on the name of the Lord.

Whatever you are going through today, remember the Maccabees.  Remember the God we serve is bigger than any problem that in the world’s eyes seems insurmountable.  Remember he will always work for the good of those who love Him!

2 thoughts on “Miracle of Miracles by Danielle Tokajer”