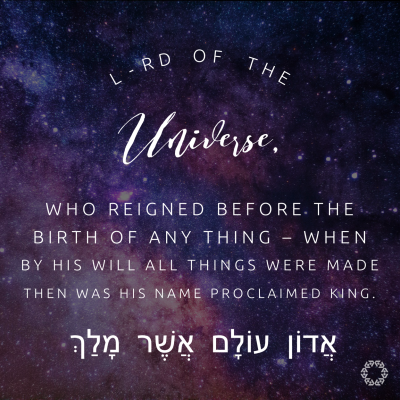 L-rd of the Universe,

who reigned before the birth of any thing –

When by His will all things were made

then was His name proclaimed King.

And when all things shall cease to be

He alone will reign in awe.

He was, He is, and He shall be

He is One, there is none else,

Without beginning, without end.

He is unfathomable, incomparable, unchanging and unexchangable;

He cannot be aggregated nor dispersed;

He is great of power and strength.

He is my G-d; my Redeemer lives.

He is the Rock on whom I rely –

My banner and my safe retreat,

my cup, my portion when I cry.

He is a healer and a cure;

He is all-seeing and a support.

Into His hand my soul I place,

when I awake and when I sleep.

The L-rd is with me, I shall not fear;

body and soul from harm will He keep.

In His Sanctuary will my soul rejoice;

may He send our Messiah speedily.

The shall we sing in the Holy Temple,

Amein, Amein to the awesome Name.

Note: Additional verses from the Sephardic version are noted in blue.

The Adon Olam prayer officially begins the synagogue service.  Although it is a popular practice in many synagogues to sing this piyyut at the end of services, traditional Siddurim also include it as the first congregational prayer each morning.

We’ve learned that the focus of the Mah Tovu prayer, which we sing individually as we enter the synagogue, is to exhort us to leave all our personal joys and sorrows behind so we many worship without distraction.  We then sing the Adon Olam together to begin our Shachrit service.

The words of the Adon Olam pull us into a greater awareness of Hashem.  He is the ineffable G-d; the Ein Sof.  The Adon Olam brings specific attributes to mind so that we can relate to Hashem the infinite – as best we can.

Hashem is King.  He kingship is not dependent upon having a nation to rule; He was King before creation and He will remain King after creation has passed away.  Unlike earthly kings, Hashem’s sovereignty is derived from no one but Him.  Creation does not make Him King; creation proclaims Him King.

Hashem is Creator.  The purpose of creation is for man, of his own free will, to choose Hashem.  From the smallest particle to the greatest galaxy, all creation points to Hashem as Creator; all creation beckons us to seek Him.

Hashem is Eternal.  We shift away from the overwhelming design of His creation to contemplate the mind-blowing vastness of Him.  Hashem can be contained in neither time not space; His existence is even beyond eternity.  We are confronted with the challenge to envision the indescribable and to understand the unfathomable.

Hashem is Personal.  After barely tasting the infinite, we are suddenly launched into 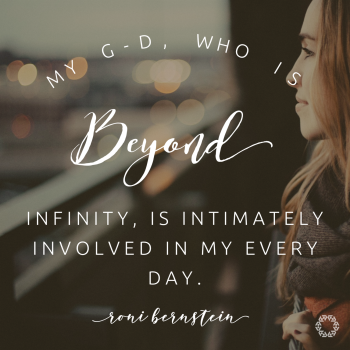 an accounting of all the ways in which Hashem personally relates to each of us.  He is my G-d, my redeemer, my rock, my banner, my protector, my deliverer, my healer, my provider.  Each description is worthy of a paragraph, yet this list is far from exhaustive.  My G-d, who is beyond infinity, is intimately involved in my every day.  Every part of my existence is fully infused with Hashem’s presence.

In the Sephardic closing lines we join in eager anticipation of the rebuilt Holy Temple and the days of Mashiach, capturing beautifully the vision penned by Malachi, “There we will serve You with reverence as in the days of old and as in former years.”

Roni Bernstein is originally from the Catskills area of Central New York and has lived in Southwest Florida since 1989. She holds a BA in Finance from the University of South Florida in addition to CLU / ChFC designations and multiple SEC registrations. Her career in the financial services industry spans four decades.  A classically trained pianist, Roni enjoys baking cakes, pies, & cookies for family, friends, and co-workers. Mother of three grown children, Greg, Whitney, and Christopher, Roni is also an NRA Life Member and member of Mensa. Roni has been actively involved in Messianic Judaism since 2004 and continues to improve her ability to read and understand Biblical and conversational Hebrew. She also leads Ashtey Ḥayil (Women of Valor), a women’s group centered on keeping a Jewish home. Married on Lag B’Omer 5770 to Rabbi Steven Bernstein, Roni serves as Rebbitzen at Aydat HaDerekh (Congregation of The Way) in Fort Myers, Florida. They enjoy watching movies and attending art/craft shows, gun shows, car shows, and local concerts & productions. They travel to Israel annually.