There are certain spiritual truths, verses, concepts that stick with you – things that have seeped down into the deep recesses of your heart.  They become the foundation of your faith in G-d, the unshakeable knowledge that sees you through when the waters of life get rough.  For me, it is the knowledge that G-d will always provide.  He will always take care of his children.  More times than I can count, I have quoted this verse to people I’ve talked to who were struggling with seeing how G-d would handle a situation of need, whether physical, emotional, or spiritual:

I have been young, and now am old, yet I have not seen the righteous forsaken or his children begging for bread.  Psalm 37:25

This simple verse is a bedrock of my faith.  It is what I am left with if everything else is stripped away.  No matter what may happen in life – personal struggle, financial hardships, illness, talk of impending world doom – none of these things is too great to deal with because I know that G-d will take care of me and my family.

In the Bible, we find many examples of him supernaturally providing for the needs of various people.  The one that always lingers in my mind is the prophetic luminary, Elijah.  He instructs Elijah to flee into the wilderness to wait out the coming drought that will plague the land.

Now Elijah the Tishbite, of Tishbe in Gilead, said to Ahab, “As the L-rd, the G-d of Israel, lives, before whom I stand, thee shall be neither dew nor rain these years, except by my word.”  And the word of the L-rd came to him: “Depart from here and turn eastward and hide yourself by the brood Cherith, which is east of the Jordan.  You shall drink from the brook, and I have commanded the ravens to feed you there.”  So he went and did according to the word of the L-rd.  He went and lived by the brook Cherith that is east of the Jordan.  And the ravens brought him bread and meat in the morning and bread and meat in the evening, and he drank from the brook.  1 Kings 17:1-6 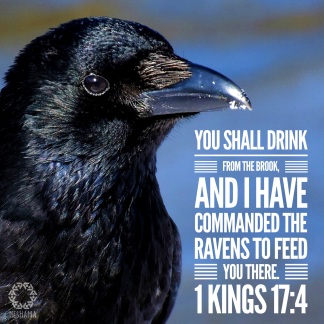 I have absolute faith that even in the midst of the most dire circumstance, G-d will find a way to take care of me.  He can send the ravens to deliver food, but sometimes those ravens look very much like humans and we are called upon to be the ones to care for those in need.

There is a traditional prayer at a baby’s dedication that the child “will grow into a life of Torah, chuppah and ma’asim tovim.”  Torah stands for Jewish learning.  Chuppah is marriage and family.  Ma’asim tovim means good deeds.  In Judaism, good deeds are not something that is impulsive.  It is seen as something deliberate and regular.  Jews are commanded through mitzvot to feed the hungry, clothe the naked, and shelter those in need.  Ma’asim tovim can be separated into the three categories:  tzedakah, gemilut chassadim and tikkun olam.

Tzedakah is generally giving money to the those in need or “righteous giving.”  The Talmud says that “Tzedakah is as important as all the other commandments put together.”  It is seen as obligatory.  It is based on the belief that all humans deserve help. Jewish law requires that even the poor give something to those less fortunate than themselves, even if their gift comes directly from tzedakah given to them by someone else.  Yeshua pointed out the widow who gave what little she had.  (Luke 21:1-4; Mark 12:41-44)  They were giving into the Temple “tzedakah box,” but proportionally hers was greater because she gave all of what little she had.

In Judaism, the order of tzedakah is that you help those in your immediate community first and then the giving goes outward from there.  We can see this exemplified with the 1st century believers:

All the believers were together and had everything in common.  Selling their possessions and goods, they gave to anyone as he had need.  Acts 2:44-45

All the believers were one in heart and mind.  No one claimed that any of his possessions was his own, but they shared everything they had.  Acts 4:32

In those days when they number of disciples was increasing, the Grecian Jews among them complained against the Hebraic Jews because their widows were being overlooked in the daily distribution of food.  Acts 6:1

Tzedakah was so important, that the one stipulation to James, Peter and John blessing Paul’s ministry to the Gentiles was that he continue with tzedakah:

On the contrary, they saw that I had been entrusted with the task of preaching the gospel to the Gentiles, just as Peter had been to the Jews.  For G-d, who was at work in the ministry of Peter as an apostle to the Jews, was also at work in my ministry as an apostle to the Gentiles.  James, Peter and John, those reputed to be pillars, gave me and Barnabas the right hand of fellowship when they recognized the grace given to me.  They agreed that we should go to the Gentiles, and they to the Jews.  All they asked was that we should continue to remember the poor, the very thing I was eager to do.  Galations 2:7-10

The highest of all mensches and most learned Jewish scholar, of course Paul understood and adhered to the mitzvah of tzedakah.  Paul speaks of tzedakah to Jewish believers in Israel as “fruit.”  It is “owed” to them.  Here we have the first MJIF:

Now, however, I am on my way to Jerusalem in the service of the saints there.  For Macedonia and Achaia were pleased to make a contribution for the poor among the saints in Jerusalem.  They were pleased to do it, and indeed they owe it to them.  For if the Gentiles have shared in the Jews’ spiritual blessings, they owe it to the Jews to share with them their material blessings.  So after I have completed this task and have made sure that they have received this fruit, I will go to Spain and visit you on the way.  Romans 15:25-28

Besides the examples we see in the brit chadasha, the concept of tzedakah is firmly rooted in the tanakh.  A man who gives gifts to the poor is described as one who fears the Lord, righteous, and one who will be honored (Psalm 112:1, 9).  But if he neglects to give tzedakah, his prayers will go unanswered and he will be cursed.  (Proverbs 21:13; Proverbs 28:27) Eshet Chayil, the most revered picture of womanhood, is described as one who gives tzedakah (Proverbs 31:20).

Yeshua, himself, preached the very same concept before Rambam:

Be careful not to do your ‘acts of righteousness (tzedakah)’ before men, to be seen 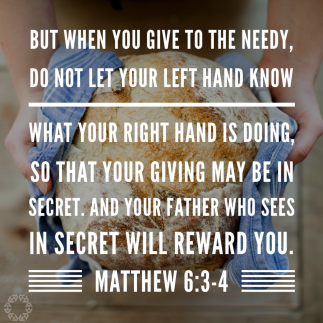 by them.  If you do, you will have no reward from your Father in heaven.  So when you give to the needy, do not announce it with trumpets, as the hypocrites do in the synagogues and on the streets, to be honored by men.  I tell you the truth, they have received their reward in full.  But when you give to the needy, do not let your left hand know what your right hand is doing, so that your giving may be in secret.  Then your Father, who sees what is done in secret, will reward you.  Matthew 6:1-4

Gemilut chasadim is “acts of loving kindness” or donating time and energy to help those in need.  It is the highest form of ma’asim tovim, though it is not, strictly speaking, a mitzvah.  These acts are regarded as higher than all sacrifices and as more meritorious than all the commandments. (Shabbat 127a)  It involves a face to face encounter with the need.  It is not, like tzedakah, restricted to the poor.

There are six traditional forms of gemilut chassadim: providing clothes for the naked, visiting the sick, comforting mourners, accompanying the dead to the grave, providing for brides, and offering hospitality to strangers.  Today’s modern interpretation includes all forms of volunteerism in which one is giving of oneself to fill the need of another.

Job, a man who was “blameless and upright, one who feared G-d and turned away from evil (Job 1:1), understood gemilut chasadim and cared for others out of his fear and reverence for G-d:

If I have denied the desires of the poor or let the eyes of the widow grow weary, if I have kept my bread to myself, not sharing it with the fatherless- but from my youth I reared him as would a father, and from my birth I guided the widow- if I have seen anyone perishing for lack of clothing, or a needy man without a garment, and his heart did not bless me for warming him with the fleece from my sheep, if I have raised my hand against the fatherless, knowing that I had influence in court then let my arm fall from the shoulder, let it be broken off at the joint.  For I dreaded destruction from God, and for fear of his splendor I could not do such things.  Job 31:16-23

Just as with tzedakah, gemillut chasadim affords us benefits, as well as benefiting those we help.  We receive deliverance from God in times of need (Psalm 41:1).  We are blessed for blessing others (Proverbs 22:9).  Most importantly, through doing this, we honor G-d (Proverbs 14:31). 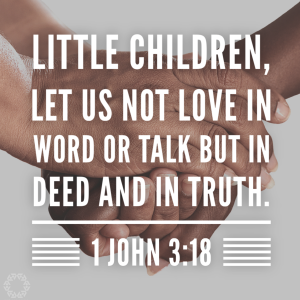 What is clearly understood in the bible is that giving to others and taking care of their needs is valued by G-d above all other forms of religious observance.  In Isaiah 58:2-14, G-d clearly spells out that the practice of religion is nothing without the concrete care of others.  This is echoed by John’s words in the Brit Chadashah:

If anyone has material possessions and sees his brother in need but has no pity on him, how can the love of God be in him?  Dear children, let us not love with words or tongue but with actions and in truth.  1 John 3:17-18

Not a New Commandment

Much is said by some about how Yeshua “taught us a new commandment” that we are to follow – to love others – but we have seen that the concept spoken of in Leviticus 19:18 to “love your neighbor as yourself” is not anything new.  Proverbs 19:17 says: “He who is kind to the poor lends to the L-rd, and he will reward him for what he has done.” Our tzedakah and acts of gemilut chasadim are credited to us as if we had done them directly for G-d.  Yeshua understood that.  In the Parable of the Sheep and the Goats (Matthew 25:31-46) he says, “whatever you did for one of the least of these brothers of mine, you did for me.” In the Parable of the Good Samaritan. (Luke 10:25-37), he expounds further on the extent to which we should go in service to another.

If we are to love our neighbor, it is essential that we practice the mitzvah of  tzedakah and gemilut chasadim, for this the concrete way we love our neighbors.  In doing so, we become the hands and feet of G-d.  We are the ways he fulfills his promise in Psalm 37:25 to not let the righteous go without.  We are the ravens.