Ah, November. I don’t know where this article finds you, but here in Illinois the temperature has dropped, the leaves have turned scarlet, pumpkin spice lattes are back, and we’ve begun lighting our scented candles in the evenings. It’s hard to believe that only a few short months ago it was the beginning of summer.

Ah, summer. At the beginning of this summer I was sitting in a freezing arena listening to seven hundred names of graduating seniors get called off, one by one. I looked down at the class ring I had decided to wear that day. I had graduated from this very school, in the same arena, on almost the exact same day twelve years before.

How did I end up here?

a tall, graceful, dark-haired young woman accept her diploma with dignity and glide across the stage.

High school was awful. I mean, I know most people feel that way, but it was the worst time of my life. Although I was an assistant director, for four years I considered myself friendless. There were five social workers assigned to my case throughout the final two and a half years. We had moved to this new town only three days before my freshman year began. I wrote a revealing journal entry that accidentally got exposed to the entire school. Mom and Dad divorced the summer between sophomore and junior year. I moved in with mom, the dog died, I moved in with dad, and by senior year I was basically just counting the minutes to freedom. When I walked out of those doors, I swore I’d never go back.

Eight years later, I took a job working in the lunchroom at my former middle school. Even excluding high school, this building was filled with all kinds of haunting memories of its own. They leered at me from around every corner and echoed down every hallway. However, the building also held many memories I treasured of the most nurturing and sacrificial teachers I’ve ever met. That’s why I was there: to follow in their footsteps and give back to the next generation.

The next generation filed into the lunchroom that first day. All together there were seventeen eighth grade girls in total, but one in particular, silent, with enormous blue eyes, caught my attention. I rarely get definitive directions from God, which is usually how I know when He’s telling me something. On that day, He singled out the blue-eyed eighth grader and said to me, “That one.”

This proved to be much easier said than done. I had no idea what He meant by “that one” and how I was supposed to go about fulfilling this mission. I tried to make conversation with all the girls, but “that one” was especially quiet. I decided that I’d need to get creative, so I sprung the idea to my boss about having an “8th grade girls mentorship lunch.” She loved the idea, so I ended up spending the last nine weeks of the school year at lunch with seventeen eighth grade girls. 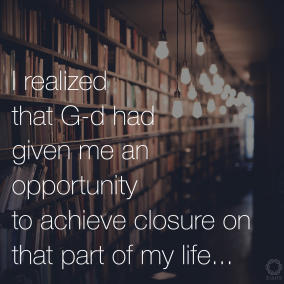 Surprisingly enough, not only did I come to love each of them, but I found that my own ghosts were not so noisy anymore. I didn’t feel haunted when I came to work. I realized that G-d had given me an opportunity to achieve closure on that part of my life, but little did I know He was only getting started.

“That one” was still not super chatty, but I knew she was going to be attending my former high school and I had made friends with her parents, so we had tentative plans to keep in touch. After a summer of getting to know one another, she invited me to attend her first choral concert in the fall. In order to do so, I had to darken the door of my alma mater.

I had been on campus briefly once or twice in the last nine years, but something about this was different. My stomach lurched as I strode through the familiar hallway towards the auditorium. Once we reached our seats, I had to clasp my hands together to keep them from shaking violently. However, as soon as my young friend alighted the stage I knew so well, I felt a peace wash over me. I felt a layer of old pain begin to peel off my heart, and in that moment I once again had that knowing from God…

For four years, I never missed a choral concert. Afterwards, I’d walk the old dark hallways alone and weep quietly, letting the years of anguish wash away with my tears. In addition to the healing I was experiencing by reliving those high school years, I also gained the friendship of an extraordinary young woman. By her senior year, I looked forward to walking those hallways and even attended my ten year reunion, where I was finally able to hear that everyone felt invisible during that time. I was not the only one.

Finally, that last June came and I was invited to the graduation ceremony for the Class of 2017. I wore my 2005 class ring and congratulated my young friend. We took a picture together on the same staircase I had stood on for pictures twelve years earlier. That was the day it finally sunk in: God wants to heal you. 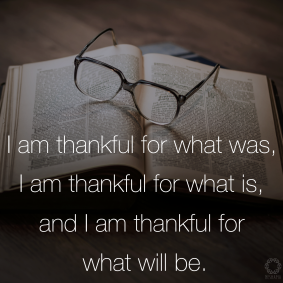 Stephanie SanHamel grew up in the Chicago Messianic community and graduated from Moody Bible Institute in 2012 with a B.A. in Jewish Studies. She works as a middle school mentor, a nanny, the social media coordinator for Life In Messiah International, and is currently writing a book for First Fruits of Zion. In January 2018, she will officially begin a full-time position with Jews for Jesus in California.